Another great year at the Reno River Festival came to a close yesterday afternoon. This year the festival was moved back to its traditional mother’s day weekend after the new dates in June didn’t work out all that well last year. The Reno River Festival is always one of my favorite events of the year, in part because its my home town festival and all my friends from around the country come to my town to hang out. This year however, the festival was a little extra special for me. In just a few days now Reno will no longer be home. Home will be wherever we are parked, so having this one last hurrah with friends old and new in the city I’ve called home for the last 5 years was an awesome way to say farewell. I competed in the freestyle events and the boater-cross. I didn’t do as well as I’d hoped in either event but had a great time none the less. I put down a pretty solid ride on my first ride in prelims of the freestyle but wasn’t able to duplicate on my second ride. I was still feeling out of breathe from the first ride when I dropped in for the second. The next comp is in Buena Vista Colorado in two weeks and you can I’ll be working on cardio conditioning between now and then. I like to look at every event as a potential learning experience. If they don’t go as well as I’d like I can certainly use them to see what I need to work on. I made it through the first round of boater-cross but in the quarter finals I was coming into the upstream gate in a close third and feeling confident I was going to push my way into second in order to advance. However, I made a small but costly mistake coming into the gate and got pushed low in the eddy resulting in having to fight to get back into third and I lost the leaders. That’s the way boater-cross goes. You never know what’s going to happen. I’m looking forward to the next race and hope the competition is just as fierce next time around. I got to assist with the commentary for the slalom race on Sunday morning which was one of the most fun parts of the event for me. I think I may have found my calling. I get a great view of the event and get to talk to the crowd about what’s going on while enjoying free food and beer supplied by the event sponsors. Not a bad gig.

Here are a few pictures from the freestyle comp this weekend. Check it out. I’m stoked to hit the road for BV. Hope to see you on the water.

Waiting for the thumbs up to start my second ride 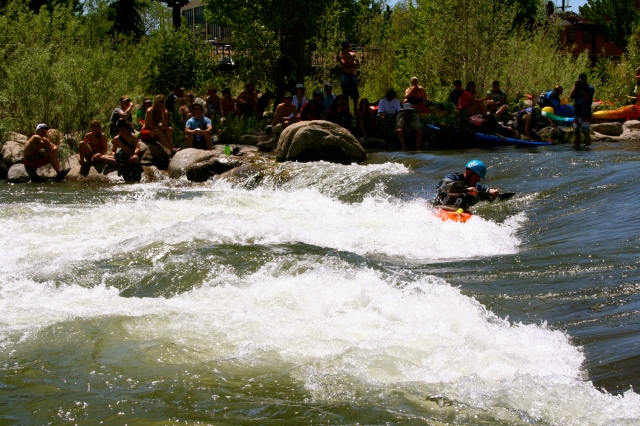 Starting things off with the wing over entry move

Finishing the entry move and keeping my head dry

Mr. Jed likes to be in the air as much as in the water

Linking a few ends is super easy in the Jed. The hard part is not getting dizzy in the process. 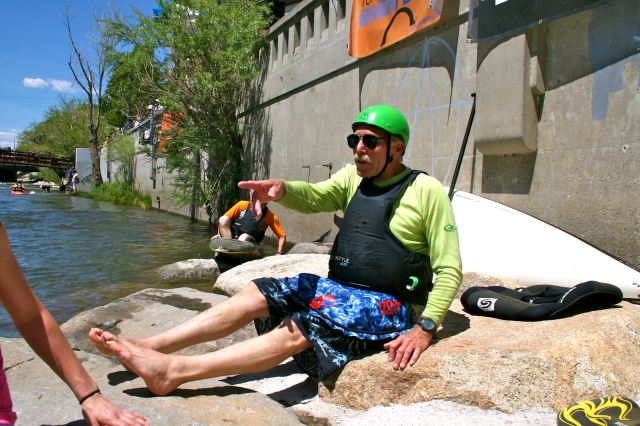