What does it mean to boof? Take a second and write down your answer, or at least think of one in your head and keep it. Got it? Ok, if your answer includes the word “rock,” I’m writing this for you. Too often I hear people confuse smashing into rocks with boofing. Yes, you can boof off of a rock, but you can also boof off of a wave or just off the water anywhere there is a loss in elevation. If you have good technique you should be able to do it in a swimming pool. Ok, it isn’t going to be very exciting in the pool but you should still be able to do it. So, what does it really mean to boof? What this strange word actually means is to control the elevation of our bow as was we lose elevation in our kayak. It doesn’t matter if you’re dropping a ten footer or just picking up the front of your boat to get over a small hole, the technique is the same. One of the most common mistakes that people make is to throw their weight backwards as they go off a drop. This is similar to the mistake I talked about in my previous break down of the stern quirt. In order to pull up the front of your kayak, you need to engage your core and squeeze your knees to your chest. This is the most critical part of the process. Even if your boof stroke is less than awesome, pulling your knees to your chest will go a long way toward more stylish landings. A great stroke with no core action will result in no boof. A poor stroke with good core action will result in a flat-ish landing. Obviously, you will need both in order to consistently fly off drops with steez, but if you have to focus on just one, use your core. 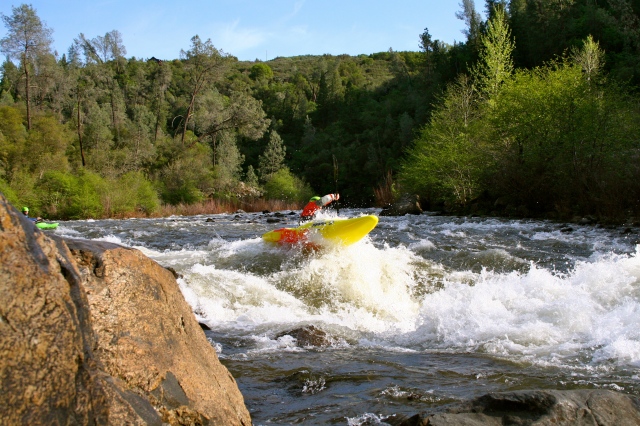