This past week I had plans to go on a short backpacking trip with my girlfriend. I’ve actually never been on a backpacking trip before and it’s something I intend to change. Late the night before we were planning to leave she tells me she’s not feeling entirely well, nothing major, but enough that getting up early and hiking miles into the wilderness with no way out but to hike miles back if things should get worse seemed like less than a good idea. Initially I was a little disappointed, but also I could easily understand why anyone wouldn’t want to be ten miles from civilization if  she did come down with the flu. We agreed that we should still get out of Coloma for a couple days and do something.

The next morning, off to a slightly later start than we had planned, we discussed options over coffee and some pretty outstanding pancakes, if I do say so myself. We settled on the idea of heading up to Loon Lake. I had never been and she hadn’t been for several years. I had heard great things about this area, and I’d been wanting to see it for a while. Awesome, we have a new plan! Oh, and a bonus, now that we’re car camping we can bring better food and more beer. We set out for the lake and made a slight detour to hike up one of my favorite creeks along the way. We enjoyed walking along the granite bedrock until we found I nice spot to sit and watch the sun go down, out on a slab at the top of a waterfall. 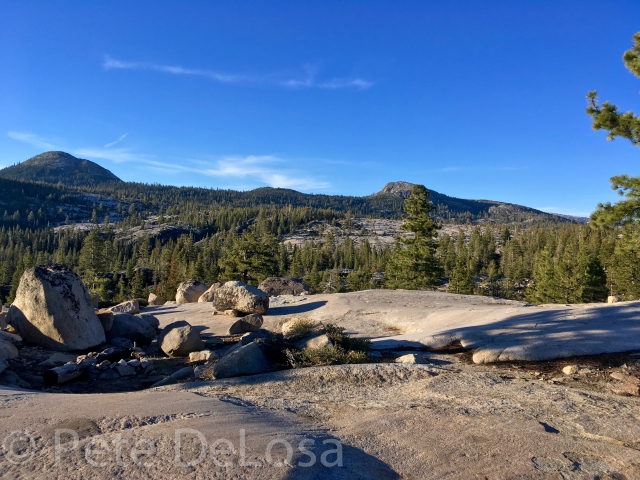 As the sun dropped below the ridge we thought we should go look for a camp spot. Neither of us was exactly sure how far we were from Loon Lake or how hard it might be to find a camp spot that wasn’t as densely populated as Sacramento. As we drove around the lake looking for vacant camping areas it became clear to me why people like Loon Lake so much. The views of this alpine lake surrounded by Sierra granite are spectacular. We drove until the road ended and we were faced with the choice of a dirt road or going back and trying to fit in among the other campers. In the mood for exploration we opted for the dirt road. Jackpot. The dirt road quickly turned into The Rubicon Trail. My Tacoma is not nearly ready for The Rubicon Trail, but it was able to get across the granite and onto a cliff over looking a valley to the north of Loon Lake.

Standing on a granite slab watching the sun go down I thought to myself, “this is in my top five all time camp spots.” We got to work on building a fire made a pretty awesome dinner all cooked on open flame. The best part was the potatoes we cooked in our rock oven. I had an idea about building an oven at the start of this trip, and mother nature provided. I found three boulders already perfectly positioned and fourth that made a top. Meanwhile, Emily engineered a shovel out of a stick and some trash we found which she then used to transfer coals from the fire into the rock oven. We put potatoes inside and enjoyed the fire and the view while we waited. After a short wait we had the best baked potatoes I’ve ever had. I don’t know if it was the location, the company, the potatoes themselves, or the fact that I was so excited that my oven contraption actually worked that made these potatoes particularly great, but they were awesome. I suspect it may have been a combination.  I am beyond excited about this new found form of camp baking. I can’t wait to explore more possibilities with other configurations in the future. If you have a cool way to cook in nature, please share.

I found this tree fascinating and had to take a picture of it.

After an amazing dinner, we found an epic view of the stars, and later when the moon came up, it was almost like day time. I really enjoy walking around on open granite by moonlight. In the morning having coffee with the sunrise was equally delightful to our dinner experience the previous evening. There is just something about being out in the middle of nowhere, with nowhere to else to be, and nothing really to do, that makes food taste so much better.

Once we were properly caffeinated, we set out to explore the surrounding granite play ground. We found a cool little creek with miniature waterfalls. We intercepted the Rubicon Trail farther out and watched some rock crawlers do their thing for a while. The best part though, was finding a little lake over the next ridge with almost no one there. Just when you think you’re alone and decide to go skinny dipping, sure enough a whole family comes walking out of the woods looking for a fishing spot.

For two people who cancelled their trip, we sure did have a great time and see a lot of beautiful parts of the mountains. As if things weren’t already rad enough, we saw a bear next to the road on our drive home. This was my first bear sighting in the greater Tahoe area. I was becoming skeptical about their existence. Turns out they’re here.

What have been your best trips that were born out of plans falling through? I’d love to hear your story. Feel free to share in the comments below.

This entry was posted in Uncategorized. Bookmark the permalink.